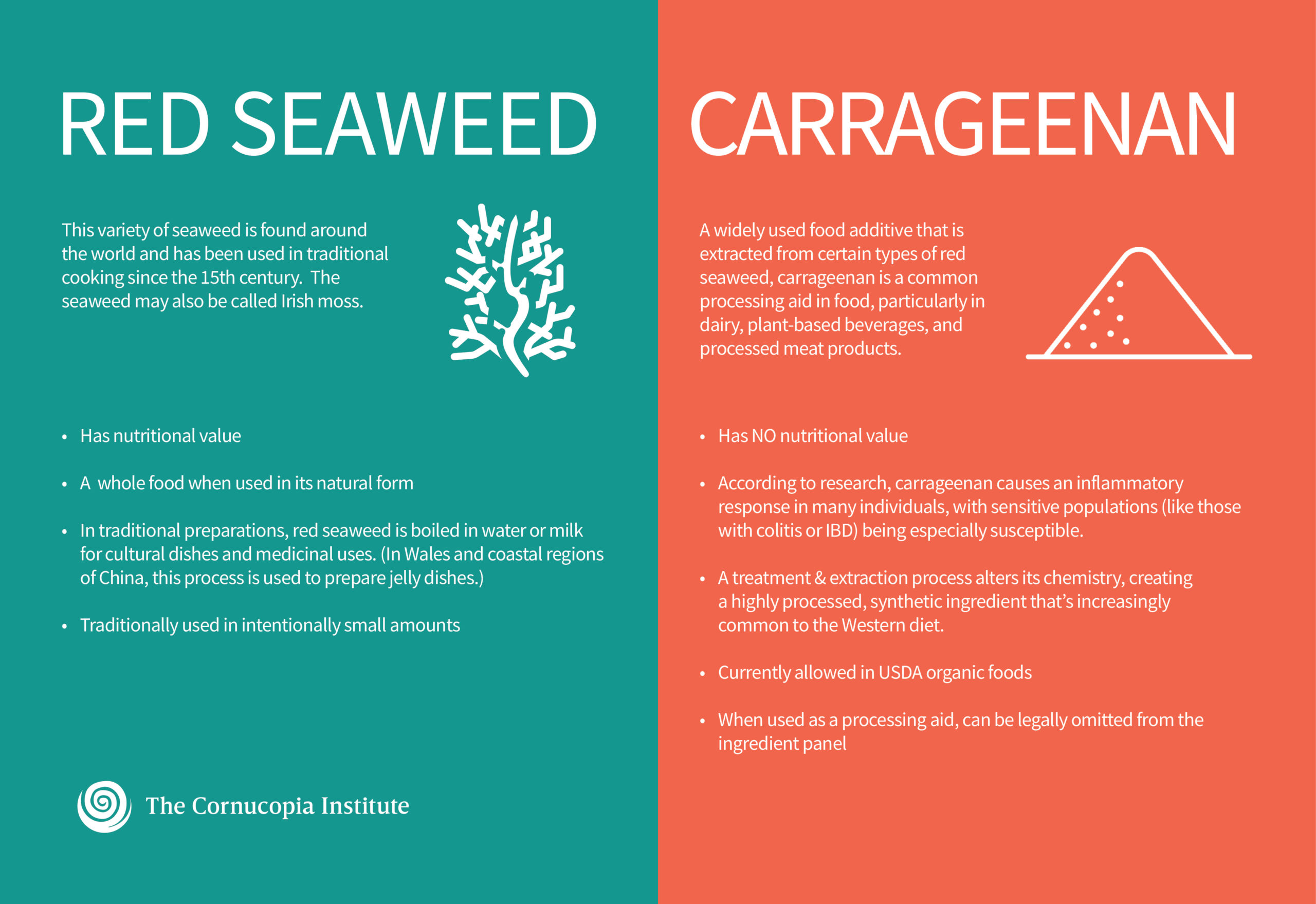 Why is there controversy over carrageenan?

Controversy over the popular additive is longstanding in the organic marketplace. Brands love this cheap additive because they believe it improves consumer satisfaction. But carrageenan poses a hidden risk: both consumer testimonials and current research show that carrageenan can cause serious inflammation when consumed.

Carrageenan provides no nutritional value to processed foods. Instead, carrageenan is often added as a stabilizer, thickening agent, or emulsifier to make a finished product that meets consumer expectations for “mouth feel.”

Though carrageenan is derived from natural sources (seaweeds), its use in food manufacturing relies on a treatment and extraction process that alters its chemistry, transforming it into a highly processed, synthetic ingredient.

In traditional preparation methods, the seaweed is infused into boiling water or milk for use in cultural dishes and medicines. (For example, coastal regions of China used this process to prepare jelly dishes.) While these traditional cooking methods separate carrageenan from its seaweed base, this process is markedly different than the preparation required for commercial applications.

Is carrageenan bad for you?

The Food and Drug Administration (FDA) considers carrageenan a “Generally Regarded as Safe” (GRAS) food additive. However, the FDA approved carrageenan for use in foods in 1961, well before the publication of a large body of research showing adverse human health effects.

What are the dangers of carrageenan?

Research shows that carrageenan causes an inflammatory response in many individuals, with sensitive populations (like those with colitis or IBD) being especially susceptible. (Read more about the current human health research.)

What effect does carrageenan have on the body?

For individuals who consume carrageenan on a regular or daily basis, the inflammation caused by the additive can be prolonged and constant. Even low-grade prolonged inflammation can be a precursor to more serious disease.

Current research validates the experience of the many individuals who report health problems when consuming carrageenan. (If you scrutinize the source of studies in favor of carrageenan, you’ll find that they are often conducted by people or institutions funded by the industry. While it can be difficult to track down affiliations, it is important to consider the source of research and information. (Learn more about how affiliations and funding affect research.)

To learn more about the fraught history of carrageenan and the organic marketplace, read Cornucopia’s 2016 Report: Carrageenan: New Studies Reinforce Link to Inflammation, Cancer and Diabetes.

Can you be allergic to carrageenan?

While some individuals may be allergic to carrageenan, true allergic responses (in which the immune system has a response to a specific allergen, causing reactions like hives or anaphylaxis) seem to be rare. Research shows that carrageenan instead causes predictable inflammation in tissues and especially the gastrointestinal system. This inflammation can cause a range of symptoms. In sensitive or high risk individuals, it can even contribute to or cause serious illness.

Some individuals with an allergy to mammal products (called alpha-gal or tick-bite meat allergy) also react severely to carrageenan. Although carrageenan is derived from seaweed and not mammals, it contains a similar molecule that the body mistakenly recognizes as the allergen. Individuals with alpha-gal are particularly high risk: Not only can they have allergic responses to carrageenan, their allergy to mammal products makes them more likely to consume dairy and meat alternatives—the very products that commonly contain carrageenan.

Is carrageenan banned in the US?

The short answer: No, it’s not banned!

Unfortunately, the FDA has taken the word of industry-sponsored “scientists” rather than public researchers. The FDA rejected a 2008 citizen petition by Dr. Joanne Tobacman, a publicly-funded scientist and carrageenan expert who formally requested that carrageenan be entirely removed from our food supply.

Is carrageenan allowed in organic food?

Yes! carrageenan was first approved for use in organic processed products in the 1990s, after carrageenan had been used in conventional food for decades.

When used as a processing aid or included in ingredients used in the final product (e.g., when carrageenan is in the cream used to make ice cream), carrageenan is not listed on the ingredient panel.

Banning its use in organic food would give consumers affected by carrageenan a safe harbor.

The history of carrageenan in organic food

The National Organic Standards Board (NOSB) recommended removing carrageen from the list of allowed substances entirely in 2016, citing its reasoning that alternatives exist in the marketplace. The NOSB also noted that public comments reported anecdotal evidence of problems with carrageenan. However, that evidence was not seen as a “primary reason” to remove carrageenan since “it is listed on the labels as a food ingredient.” This is incorrect. As noted in both the meeting transcript and the Technical Review of carrageenan at the time, carrageenan is not always listed on the label, making it difficult for consumers to avoid.

For more detail, read Cornucopia’s account of the NOSB grappling with the use of carrageenan in organic food.

Carrageenan is a common additive in foods including dairy products, non-dairy alternatives (including beverages and cheeses), and deli meats. Ice cream and beverages (including chocolate milk) with multiple ingredients that may separate are common culprits, as are other processed foods.

Carrageenan is also frequently used to clarify beer and wine.

How is carrageenan listed on food labels?

Some brands may try to hide the fact that their product contains processed carrageenan. Over the last decade, Cornucopia has seen it listed on ingredient panels as Irish moss, sea moss, red algae, and seaweed extract. However, truly natural seaweed and algae products are nothing like the highly processed carrageenan implicated in health risk studies. (If you encounter confusing labeling, contact the company to clarify whether they are using carrageenan or unprocessed seaweed. And then please share what you find out.)

One easy way to check whether there is carrageenan in your organic foods is to consult our Buyer’s Guide.

If you are a particularly sensitive individual, we recommend you always check with each brand in question before consuming a product that may contain carrageenan. We suggest calling customer service; websites aren’t always up to date.

What can you do?

Please pass the following message to your doctor:

The Cornucopia Institute, a nonprofit watchdog, is working to get carrageenan out of organic food due to its problematic health effects on sensitive individuals. Of particular concern: when carrageenan is used in processing it may not appear on the label, even though it may still be present in the food itself! Will you support Cornucopia’s efforts by submitting a comment to the National Organic Standards Board stating your clinical and patient experiences with carrageenan? Comments are due September 30, 2021; for info on how to use your voice, visit: www.cornucopia.org/carrageenan-survey-for-doctors/.

Stay tuned for another way to help our efforts: we’ll be launching a campaign to pressure a high-visibility company to remove carrageenan from its product lines.